Join the forum, it's quick and easy
F3do
Lütfen Üye Olunuz...!!!
F3do
Would you like to react to this message? Create an account in a few clicks or log in to continue.

ProShow Producer was designed for professionals who are creating shows
commercially. The all-new ProShow Producer 3.0 allows you to create
advanced, professional-grade presentation masterpieces that not only
emotionalize and inspire audiences but also bring them to the point of
sale. With an award-winning feature set, including unlimited
photo/video layering, show templates, branding, copy protection and
built-in media authoring, plus all-new creative features like masking,
vignetting and motion keyframing, the only limit to your successis your
imagination.


From digital proofing to high-end multimedia slide shows, ProShow
Producer has introduced photographers to a new way of presenting their
images to the world. With Producer, photographers can create multimedia
slide show presentations and output them to their choice of 14
different formats, including DVD, CD and the newly-added HD Video,
Flash and QuickTime output options.

Changes in Version 3.2.2039
* Added option to create Video for Devices - Choose from over 20
supported devices including iPod's®, Blackberry's®, Nintendo® Wii'sTM
and more. Simply select your device and ProShow Producer will
automatically convert your slide show to the correct format so it can
be sent directly to the device.
* Added option to create video for YouTube - Upload your slide shows
directly to your YouTube account through ProShow Producer 3.2. Just
enter in your YouTube username and password and ProShow Producer does
the rest.
* Added new Keyboard Control feature for PC based output, allows for control of shows using PowerPoint presentation remotes
* Enhanced the Download Extras feature to increase usability
* Fixed problem where number box selection could fail
* Fixed problem where Slide Options could fail to display all layers
* Fixed crash condition caused by Duplicate Layer feature 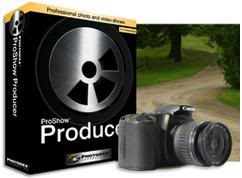 Software for Professional Slide Show Creation. A marriage of speed and
creativity. ProShow Producer is the highly anticipated professional
presentation software that joins ease of use, enhanced workflow, and
unmatched speed. If you've been using ProShow Gold, we're sure you've
experienced its incredible capabilities in digital slide show creation.
ProShow Producer goes beyond these capabilities to provide users with
creative and timesaving features that professionals demand.

Professional grade features set ProShow Producer apart.
Designed for professionals, based on technology that has been proven in
the consumer space, Producer features powerful tools that are a
must-have for the demanding pro. Based on feedback from professional
users, we've incorporated advanced features that help you create the
ultimate slide show. Learn how professional photographers use ProShow
Producer. Click here to learn more about how Professional Photographers
use ProShow Producer. View industry events that Photodex will be
attending, read about new pro features, and learn how to save big on
Producer.